Change and Continuity – Canadian Political Economy in the New Millennium 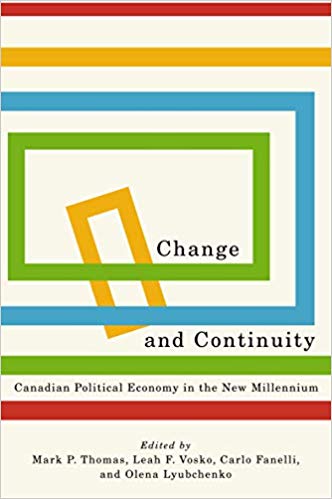 The Global Labour Speaker Series is pleased to host the book launch: Change and Continuity – Canadian Political Economy in the New Millennium

*Books will be available for purchase

In a period characterized by growing social inequality, precarious work, the legacies of settler colonialism, and the emergence of new social movements, Change and Continuity presents innovative interdisciplinary research as a guide to understanding Canada’s political economy and a contribution to progressive social change.

Engaging with interconnected topics that include shifts in immigration policy, labour market restructuring, settler colonialism, the experiences of people with disabilities, and the revitalization of workers’ movements, this collection builds upon and deepens critical analysis of Canadian society and considers its application to contexts beyond Canada.

Mark Thomas is Associate Professor in the Department of Sociology. He is former Director of the Global Labour Research Centre at York and has been a Visiting Professor at the Institute of Political Economy, Carleton University, and a Visiting Researcher at Institut de Recherches Sociologiques, Université de Genève. Current areas of research include: work, time, and new technologies; labour, austerity, and populism in urban North America; and the enforcement of employment standards legislation in Canada.

Carlo Fanelli is Assistant Professor and Coordinator of Work and Labour Studies in the Department of Social Science. He is the author of Megacity Malaise: Neoliberalism, Public Services and Labour in Toronto, and co-editor (with Bryan Evans) of The Public Sector in an Age of Austerity: Perspectives from Canada’s Provinces and Territories.

Olena Lyubchenko is a doctoral candidate in the Department of Politics at York University. Her research interests include neoliberal restructuring, gender order transformations, and labour market insecurity in former Soviet and Eastern Bloc countries; social reproduction under Soviet state-command economy; as well as comparative welfare state and family policy.

This is a free event, however seats are limited. Please RSVP via Eventbrite.