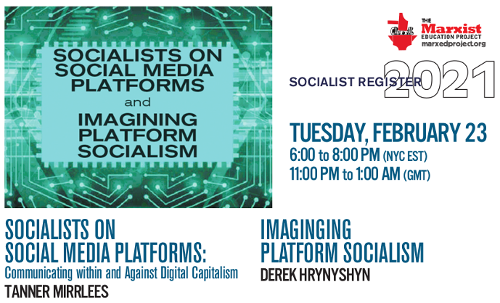 Communicating within and Against Digital Capitalism

Bertolt Brecht, in the 1932 essay ‘The Radio as an Apparatus of Communication’, made a ‘positive suggestion’ to transform radio into a dialogical medium for many-to-many communications. ‘Radio is one-sided when it should be two’ said Brecht. Brecht saw the state as the only entity capable of remaking radio in this way, but because radio’s ‘proper application’ might make it a ‘revolutionary’ medium, Brecht concluded the bourgeois state would have ‘no interest in sponsoring such exercises’.

Brecht’s ‘positive suggestion’ for a many-to-many communications system seems to have come to fruition with the internet, and more recently, with the spread of social media platforms such as Facebook, Twitter and YouTube. Socialists around the world are now using these platforms to produce, distribute, exhibit, and consume socialist media and cultural works, and they are openly building events, movements, and organizations within digital capitalism, to go beyond it. That said, the internet and social media platforms are surrounded by all kinds of deterministic, optimistic, and pessimistic rhetorics that cloud a clear view of what they give to and take from socialist communicators, especially as compared to the twentieth century’s mass media industries, whose state and corporate owners tended to filter out and vilify socialist ideas.

Investigations have demonstrated the ways that the operations of the algorithmic processes that select and sort information for users of YouTube, Facebook, and Twitter not only distribute such malicious content, but also amplify its effects. In order to hold the attention of users, platforms tend to recommend increasingly controversial and sensationalist suggestions, leading users quickly into rabbit holes of conspiracy theories and extremist views that undermine attempts at informed and reasoned debate. Other studies showed that Google’s search engine was capable of exhibiting serious racist bias, and that the platforms’ attempts to limit access to hate speech and misinformation were of limited effectiveness.

At the same time, the monopolistic digital platforms are undeniably of great use to activists working for a more democratic world, including socialists. The events that triggered US President Trump’s demands for stricter platform regulation were part of a mobilization of dissent that came to be known by its Twitter hashtag, ‘Black Lives Matter’, and numerous other examples could be found of activists raising awareness in ways that would not be possible with mass media. Social media empowers individuals to participate in the distribution of their own ideas, although this empowerment is limited by the mediation of the flow of information by the owners of the platforms in ways that can have direct effects on how mobilizations are informed.

This makes it all the more necessary to explore the contradictions between our expectations of social media and the reality of its use, and determine if there are ways to avoid the harms done to democracy while preserving the benefits. The purpose of this presentation is to inquire whether and how social media could be organized more democratically, so that they allow our expressive capacities to be developed freely and not under conditions determined by capital.

Derek Hrynyshyn teaches in the Department of Communication Studies at York University in Toronto, Ontario.