Fight For $15: The Challenges Ahead 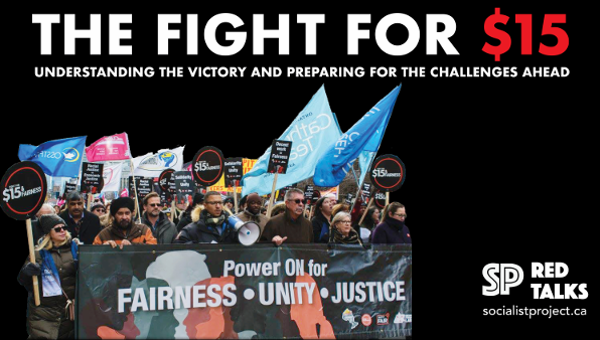 After nearly three years of organizing, protesting, striking, and lobbying, the Fight for $15 and Fairness secured a huge victory with the passage of Bill 148, the Fair Workplaces, Better Jobs Act, on November 22, 2017.

Bill 148 implements the quickest timeline to a $15 minimum wage in North America. It also ushers in a host of other labour law reforms such as expanded emergency leave days, paid leave days, elimination of doctors’ notes, fair scheduling provisions, equal pay for equal work, and card-check and successor rights in certain sectors.

However, these gains are not set in stone, and several employers and their right-wing sympathizers have already mounted an attack in order to reverse this major achievement.

Looking ahead, speakers David Bush and Mina Rajabi will address a number of critical questions about the status of the Ontario workers’ movement. What are the shortfalls of Bill 148? How did the Fight for $15 and Fairness organize to win? Why is this movement significant for the Left? What is it doing to counter the employer offence? How is it preparing for the upcoming provincial election, and what is next for the movement?

David Bush is an editor at RankandFile.ca and an activist in the Fight for $15 and Fairness campaign. He is a former union organizer with the SEIU and is currently a PhD student at York University.

Mina Rajabi is the president of the York University Graduate Students Association and an organizer for the Fight for $15 and Fairness. Last year she helped organize support for the food service workers on York campus to help them win a $15/hour wage.