‘Crush Inflation’?: Workers, Living Standards, and the Politics of Inflation 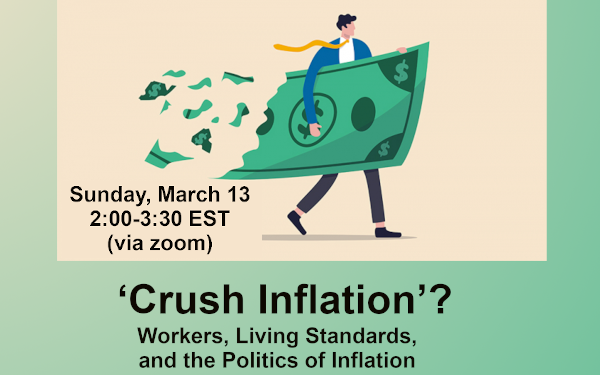 Politicians, the media, central bankers and the average worker have all been talking up the recent acceleration in the cost of living. Just a short time ago price rises of just 2% might have been considered ‘inflationary’. In the current phase of the Covid pandemic, inflation in core capitalist states, including Canada, is now running at the 5-7%, far ahead of wage settlements and bumps in income supports for welfare. Inflation always carries important consequences for workers living standards, collective bargaining and meeting basic needs for the poor. Inflation always generates class conflict, most directly and immediately over distribution but indirectly eventually over questions of power over capital and the state. How much of the price rise reflects the breakdowns in supply chains, business efforts to recoup losses during the Covid crisis, and the need to widen profit margins? How much is the calls for a new round of austerity from the capitalist classes and especially the banks presage a new wave of austerity to reverse low interest rates and the spending on emergency social programs during the pandemic? What is driving price rises and will this lead to an inflationary cycle as in the past? From a socialist perspective how should unions and social movements of the poor respond to the current crisis?