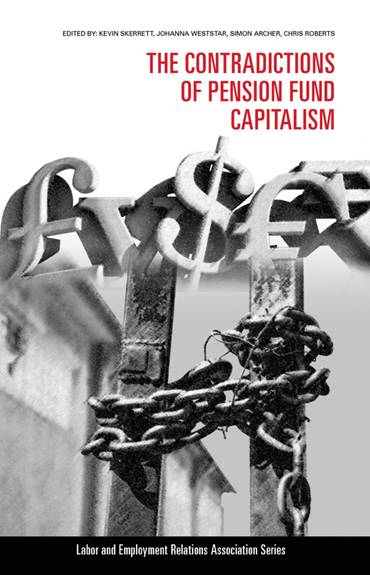 Kevin Skerrett (Research Officer for the Canadian Union of Public Employees) and Chris Roberts (National Director of Social and Economic Policy for the Canadian Labour of Congress) discuss the significance of their edited book, The Contradictions of Pension Fund Capitalism (Cornell University Press, 2018). Heather Whiteside and Janice Folk-Dawson speak to the issues the book raises for the trade union and working class movements today.

Kevin Skerrett is a Research Officer for the Canadian Union of Public Employees.

Chris Roberts is the National Director of Social and Economic Policy for the Canadian Labour Congress.

Heather Whiteside is an Assistant Professor of Political Science at the University of Waterloo and the author of About Canada: Public-Private Partnerships.

Chaired and introduced by Greg Albo, Centre for Social Justice and Associate professor of Political Science at York University.

Book description: it is often hoped and assumed that union stewardship of pension investments will produce tangible and enduring benefits for workers and their communities while minimizing the negative effects of what are now global and intensely competitive capital markets. At the core of this book is a desire to question the proposition that workers and their organizations can exert meaningful control over pension funds in the context of current financial markets. Contributing authors review the recent experience of pension “austerity” by comparing the situations of Canada, the US, the UK and Australia. The concluding chapter argues that the central implication of this recent history is an urgent need for a re-orientation of trade union and working class movements to a demand for adequate, universal pension provision that is no longer embedded in financial markets.