The Big Tech Monopolies and the State /w Grace Blakeley 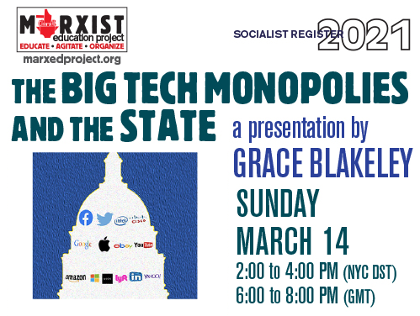 As the effects of the coronavirus pandemic swept through the global economy, the average observer could have been forgiven for missing a critical piece of news: by May 2020, the combined market capitalization of the four largest US tech companies reached one fifth of the entire S&P 500. Four companies – Microsoft, Apple, Amazon and Facebook – now account for 20 per cent of the combined value of the 500 largest US corporations – an unparalleled level of market concentration. Forty years ago, these corporate entities were either just beyond being plucky start-ups, or did not even exist. Monopolistic tendencies are not limited to the tech sector. In 1975, the largest 100 US companies accounted for nearly half of the earnings of all publicly listed companies; by 2015, their share reached 84 per cent.

Capitalist corporations appear monopolistic when they are able to access the investment needed to gain total market dominance – and as the 21st Century has progressed, this has proven easier than ever, especially in big tech. The tech companies emerged in a world of falling profits and associated rising volatility in financial markets – both of which facilitated their access to investment. Many of these companies were initially either unprofitable or loss making, as they had not yet developed to a sufficient size to exploit the network effects that would provide the foundation for their monopoly-like power. As a result, they required significant amounts of upfront investment to maintain their operations and to scale up to reach a position of market dominance that would allow them to turn a profit.

Grace Blakeley is a staff writer at Tribune and author of Stolen: How to Save the World from Financialization.

All events are sliding scale. No one is denied admission for inability to pay. If you are unable to pay and would like to attend the event, please write to info@marxedproject.org.

Part of the Socialist Register series: Beyond Digital Capitalism.